The Asset Mapping Atlas Co-designed by The Jeder Institute 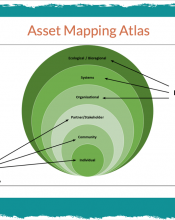 Jeder’s Asset Mapping Atlas was only so named because we wanted to avoid the idea of levels of hierarchy or areas of importance. The concept behind this is most clearly stated by ABCD co-founder, John McKnight, who says, “Every single person has capacities, abilities and gifts. Living a good life depends on whether those capacities can be used, abilities expressed, and gifts given”.

Asset Mapping is a journey of discovery and we need to be intentionally prepared, take our time, get an overview of the lay of the land, discover the borders and boundaries, explore the miscellaneous, co-design dialogue and listen deeply with the following in mind:

So, how do we do this? What are some ways we can intentionally map what is needed?

Firstly, we offer a “do no harm” checklist:

The Asset Mapping Atlas; a story

The Art of Community Asset Mapping

Asset mapping is a vehicle for community to identify, discover and connect with each other. It’s not the only strategy to support communities but it is more than a tool; it connects people through the sharing of stories and the identification of mutual strengths.

The following three important steps to asset mapping are relationship based and action orientated. It’s so important to slow down and ensure that each step is community-led and remember; good work takes time: