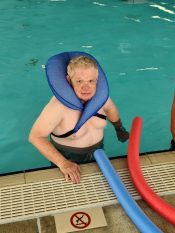 Renato is an NDIA participant who suffers from 5 different types of seizures and a mild intellectual disability. Renato is 56 years old, still lives in the family home he lived in with his father, which he now owns himself, and over the years, his fine motor skills have gradually deteriorated.

Renato used to walk everywhere. He played tenpin bowling in a local competition, swam regularly, volunteered at the local library every day and was once awarded a Community Acknowledgement certificate from Coffs Harbour City Council.

In his personal life, Renato used to be able to cook his own meals, wash his clothes, maintain his home, mow, garden etc but over time, due to the increase in his seizures and medication changes, this was becoming more difficult.

Renato thought he would never be able to get back into a pool or ocean again and was even actively discouraged by some health professionals but, with the support of a brilliant physiotherapist and our amazing support team, Renato is now back in the water and, as you can see from his photos, he loves mucking around with his team, and playing in the water, like he used to do with his nieces and nephews.

Renato now has a fantastic, supportive team who are encouraging and supporting him to live independently in his own home and cooking, washing, cleaning and gardening. He has now achieved all but one of his goals; going back to his tenpin bowling competition, which we are working on slowly, due to COVID-19 and a medication change which significantly held up the progress.

Renato always wanted to stay at home, and whilst it has certainly taken time, we have more than successfully managed to keep Renato out of the aged care system and comfortably living independently in his own home.

With the right independent support, Renato has ticked a whole lot of his own boxes!